In this school year of unique happenings, an EHS student added one more thing to her senior year life. Baylee Anderson signed Friday morning, March 19, to play volleyball for the Kankakee Cavaliers. While a college signing in itself is not unusual, this simple act Friday morning is unusual because it occurred before she ever stepped on court to play a competition game as a senior. Her first game is Saturday, March 20 at home in the Prophetstown gym.

The Kankakee Volleyball Coach Terry Allison was impressed enough with the game highlights and goals submitted by Anderson to invite her down to Kankakee for an open gym practice in November. During this time he observed her skills and introduced her to potential team members. Anderson commented that many of the tall girls will be returning to the Region IV NJCAA school in the fall. She enjoyed the experience and hopes to be playing in the defensive specialist position.

Anderson has always wanted to play at the college level. With two older brothers, she learned how to play hard and take any of the spills on the volleyball or basketball court and jump back up to play some more. Anderson said she watched a lot of volleyball over the years and thought that digging the ball was impressive but also realized that she is not the body type for that so she started looking at the other positions that she could play.  According to Panther Coach Heather Bruns, Anderson is not afraid at all of falling on the gym floor if that is what it takes to keep the ball in play. Coach Bruns also attributed Anderson's skill level to a strong dedication, playing club ball, and learning to play new positions. As a junior, Anderson was a setter but this year she has moved into a defensive specialist position. This move seems to be working well in practices as she can read the ball well and get to it to help a teammate or simply get it over the net herself.

The Sauk Valley College also approached Anderson but Sauk does not offer a physical therapy assistant program, a vocation that Anderson wants to pursue. Coach Bruns helped Anderson by suggesting colleges and helping to edit game films into a video of Anderson's highlights. In the end, it was Anderson herself who did the work for Kankakee consideration and after the November visit, she just felt that the Cavaliers were the future team for her. By being in Region IV Anderson will play against Sauk Valley so family and friends can hopefully travel to Dixon to see her play.

Anderson concluded that she is excited for the season to finally start and the culture of the team returning is wonderful. For Coach Bruns, Anderson is the third player she has had to sign to play at college level volleyball. Previously players were Jenna Saad and Jasmine Nickerson.

Attending the signing were her mother, Cherie Newton, father Brad Anderson and her step mom, Sara Anderson, brothers Trey and Brady Anderson along with fellow Panther teammates.
Coach Allison was to be at the signing as well but he alerted Anderson that he was ill and would not be able to attend. 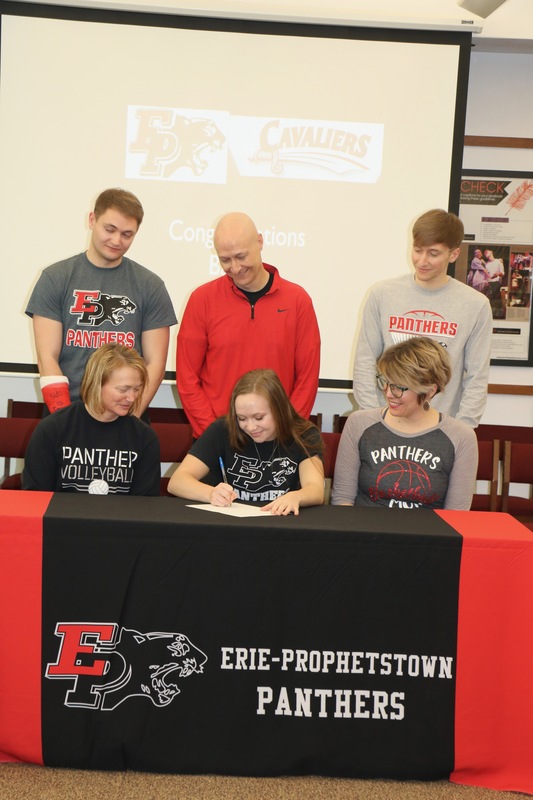