Forty Years of Leadership & Service for the Erie Chapter of NHS

The EHS National Honor Society Chapter has patiently waited out this school year hoping to have our annual induction in person. March 16 saw the reality of inducting 13 of the 15 members accepted into the chapter. Unfortunately, one was sick and one was quarantined. For the remaining 13 and their parents, along with a few of the present NHS members leading the ceremony, it was a memorable evening. Parker Holldorf and Hannah Kirkpatrick will give their speeches at an NHS meeting in the future.

Following the processional, President Grace Johnson welcomed the group and lit the candle of knowledge. She then gave a brief history of NHS which was built in 1921 by a group of secondary principals to recognize the accomplishments of students with strong academics, leadership, good character, and service being done by students in their schools. Erie High School’s charter was founded in 1981 with English teacher William Ludwig leading the group for many years.

Prior to Tuesday night’s induction the Erie Chapter had 607 members. Many family members have also been a member of this prestigious group. Each and every one of the members are considered a life long member and continue to serve their community, employer, church, and school in the four pillars NHS is built on: Scholarship, Character, Leadership, and Service.

Each of the inductees listened to a brief speech from Superintendent Milem. Mya Jones and Carter Jepson each speaking on two of the pillars of NHS and lighting candles in that pillar’s honor. Advisor Mrs. Proeger followed with a few brief remarks  encouraging members to become involved as quickly as they can in the remaining projects planned for this year. She also reminded them that all voices should be heard from at meetings or in the classroom.

The inductees came forward when called by secretary Ella Heyvaert to give a one minute speech on a characteristic they personally valued. Speeches ranged from empathy, compassion, courage, confidence, trust, loyalty, and others. After their speech each new inductee received the NHS stole from treasurer Chloe Wiseley, signed the chapter membership book, and received their certificate of membership.

The final item on the program was the candle lighting ceremony and the repeating of the NHS pledge. A reception was then held for the inductees and their families. 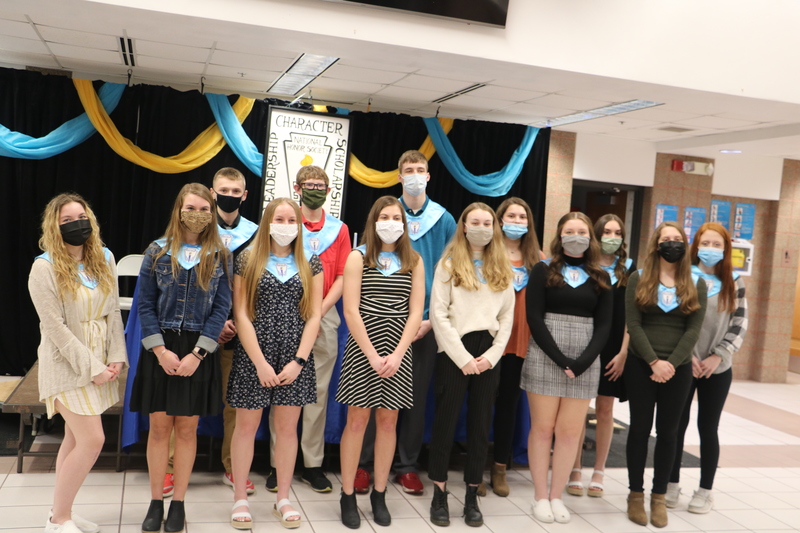